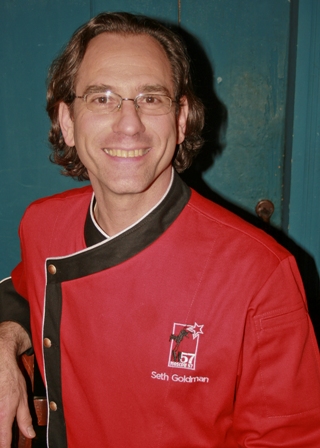 Restaurateur, Executive Chef & ProducerSeth has been a private chef, worked as a caterer and events consultant and owned a restaurant in Port Jervis, NY, in addition to cooking in restaurants in New York City, the Hudson and Delaware Valleys and Pennsylvania. He has cooked dinners for movie stars, breakfasts for senators and lunch for world-famous chefs, and three meals a day for 250 hungry football players. Seth was featured on PBS Television’s New Jersey Works. The most fun he’s had since beginning his career in the food business is playing with the fragrant Central Asian herbs and spices, like marigold petals, used in the foods of Moscow 57. Producer/Artist ManagerBefore training as a chef at the French Culinary institute, Seth Goldman had an extensive career in the entertainment industry. He stage-managed Tina Howe’s Coastal Disturbances on Broadway, produced theater in New York, London and Edinburgh, produced and distributed record albums, and worked as a representative of musical, film and theater artists including Ellen. He has also produced live music events in restaurants throughout NYC, and, with Ellen, several music series.