Also, please check the drop-down menu under our “M57 PRESS” tab to see the full list. Thanks. 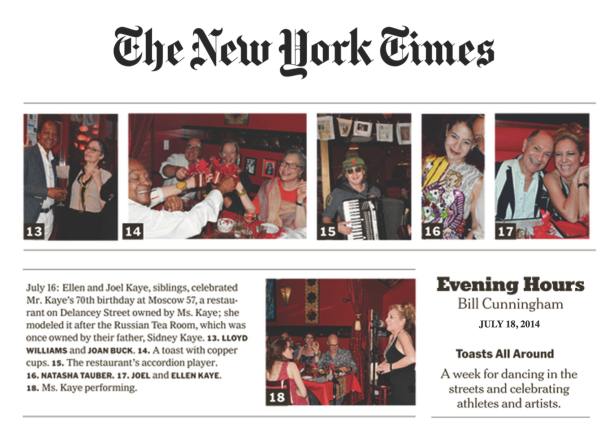 It’s not damning with faint praise to say that this lipstick-red bandbox of a restaurant in the shadow of theWilliamsburg Bridge has what may be the best children’s menu in town. Kebabs, pelmeni dumplings, sour cherry rice, borscht and mashed potatoes with sour cream and garlic do not talk down to youngsters. These items are also on Seth Goldman’s adult menu, along with zakuska (“Russian tapas,” he calls them), Georgian chicken, blini and caviar to wash down with infused vodka. Mr. Goldman is in partnership with Ellen Kaye, whose parents, Faith Stewart-Gordon and Sidney Kaye, owned the fabled Russian Tea Room from 1947 to 1996. Ms. Kaye and Mr. Goldman will run their catering and entertainment business here, also called Moscow 57, with Ethan Fein, another partner. “It’s great to have a home base,” Ms. Kaye said. “We’ll have music every night.” (Opens Feb. 5): 168 ½ Delancey Street (Clinton Street), 212-260-5775, moscow57.com.

INDIKITCH This is a quick-service Indian place with an open kitchen and 60 seats. It is owned by the Amin family, who also run Deep Foods in Union County, N.J., makers of Tandoori Chef frozen foods. There are platters, sandwiches, salads and rice dishes. (Thursday): 25 West 23rd Street, 646-590-7152,  indikitch.com.

EGG This Southern-style breakfast and lunch spot is to move in a few weeks into the space occupied by Parish Hall, which closed last week: 109 NorthThird Street (Bedford Avenue), Williamsburg, Brooklyn.

EXKI The name of this Belgian restaurant-market, which is to open in June, is a play on the word exquis, French for exquisite. This is the first American outlet for a company that started in 2001 and now has 73 locations in Europe. Laurent Kahn, a partner, plans to hire a New York chef and stress organic ingredients: 257 Park Avenue South (East 20th Street).

Oh hey, it looks like Russia in here, too…

Bid a hearty привет to Moscow 57, an eclectic Russian/Central Asian dinner-and-live-music spot, opening tonight on the LES at the foot of the Williamsburg Bridge.

One of the people behind it is a singer whose parents owned the Russian Tea Room for almost 50 years.
Hence the fondness for zakuska (Russian small plates) and espresso-infused vodka with hot chocolate. Which is today’s winner of the “Holy sh*t that sounds perfect right now” award.

And she runs a music label along with the chef.
Which means they’ll have live performances every night. Some jazz, some African roots. So… not so Russian.

Blini, kebabs… Georgian chicken chakhobili: it’s all covered.
Along with your standard-issue osetra and sevruga caviars. (Read: the ones you want.)

It’s so red.
Just so, so red. Everywhere you look, red.

It’s almost as if they especially enjoy vodka.

Amid the Mulch, Musical Notes 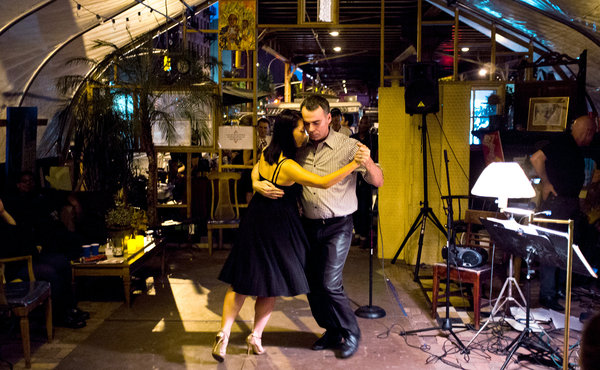 THE rush-hour Metro-North trains roared overhead at the Urban Garden Center in East Harlem with impressive force and frequency. As a woman left with a bag of fresh produce, a bass player wheeled in his oversize instrument, past fragrant mulch beds and potted shrubs, to join other musicians setting up in a greenhouse. Two baby chickens played tug of war with a piece of straw, and a young juggler rehearsed with a set of white balls.

“I wanted to shed the traditional garden center theme,” said Dimitri Gatanas, a third-generation garden retailer who runs the center with his family. He paused while a train passed by. “It’s a retail operation with a community-minded mantra.”

That afternoon, Eni Bakallbashi had dropped in for a scoop of potting soil for succulents and a bromeliad she bought this year.

“They’ve always been good to me here,” she said, adding that the center was a welcome arrival in the often-maligned neighborhood. “I work near the flower district,” she said, “but I want to support local.”

Bordered by the uptown and downtown lanes of Park Avenue, the 20,000-square-foot space at 116th Street is part of La Marqueta, a once-vibrant commercial hub that stretches for several blocks underneath the commuter-train viaduct. Despite repeated efforts to bring back the bustle of its midcentury days, much of the complex has been abandoned for decades. The arrival of the garden center last year and a clutch of food stalls on 115th Street, including a retail space for the bakery Hot Bread Kitchen, may beckon shoppers to the area once again.

The narrow lot, with bric-a-brac furnishings scattered throughout, looks more like an estate sale with potted plants on offer than a typical nursery. A row of wire-and-wooden chairs (including a high chair) was adorned with grape ivy, Ming Aralia, an odd rock sculpture and a feline wood carving. A church pew and an old Singer sewing table displayed miniature Neanthe Bella Palm and coffee and prayer plants.

Many things in the center, including a few of the chickens and a piano, were rescued by neighbors who frequent the space, Mr. Gatanas said. Others are family possessions he cannot part with, including a white and gold brocade living room set. Of his deceased grandmother, he said, “She’d kill me” if she knew where he had taken her furniture.

The center hosts weekly Community Supported Agriculture pickups, clothing drop-offs and gardening classes, as well as free performances. This night, the melody of a lone and low jazz guitar floated in the air, momentarily blotted out by screeching brakes and a rolling train. The performers were warming up for a bill of jazz, blues, rock and folk, part of a pop-up series organized by Moscow 57, an entertainment and catering group with a wide and eclectic circle of artist friends in search of an audience.

“I’m so glad you’re here,” said Ellen Kaye, one of the organizers who was running the show, as she walked two women to a table in the greenhouse. One family had driven from Fairfield County, Conn.: a husband, wife and daughter making the trek for the free music. He said they were taken with the setting.

Gesturing at a large planter near the table, the suburbanite inhaled deeply. “How many places do you go where there’s good air?” he asked.

Toward the end of the evening, Ms. Kaye crouched to share the microphone with two little girls who eagerly “ba-ba-baed” as she sang Anita O’Day’s “Boogie Blues.”

In the audience, Maritza Sabio, who lives around the corner on 118th Street, watched her granddaughter, Chaelyn, 4, scatting for the first time.

“I was just going to go home,” Ms. Sabio said. But walking by, she saw food being served and hadn’t cooked that night.

Now, sitting on Mr. Gatanas’s grandmother’s couch, she was sending texts to friends to join her.