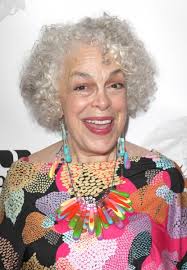 Marilyn Sokol is an actress, comedienne and singer of many moods, sharing her talents in virtually every performing arts medium – from the Broadway stage to Hollywood films, and from primetime TV and an Emmy Award to Off Broadway and an Obie Award. Critics have called her “A Marvel” (NY Times), “Hilarious” (LA Times) “Absolutely Brilliant” (NY Post and Daily News), and “A powerhouse of a performer” (SF Examiner).

American Sustainable Business Council promotes a sustainable economy. A sustainable economy is one that provides economic development along with shared prosperity, environmental protection, and social justice. It is essential from both a pragmatic and moral standpoint to restructure our economy to achieve the right balance.They believe business must play a critical and positive role in our society, a role that goes beyond providing investors with good returns. At the same time, government has an important role in ensuring that markets are well-structured and that public resources are invested with vision and stewardship. Learn more at asbcouncil.org

Miriam Novalle is the founder and CEO of T Salon established in 1992. By using her extraordinary skills as a perfumer or “Nose”, she has since been dubbed by New York Times as the “Tea Guru” for her harmonious blends.

When Miriam opened her first T Salon there were only a handful of establishments in New York City that offered the tradition of tea. Growing with the appreciation for tea, and the early success of Soho’s T Salon & Emporium, Miriam branched out to the Flatiron district, Chelsea Market in the meatpacking district and later to West Hollywood in LA. She has since engaged T Salon products in “pop-up companies” for MAC cosmetics and New York City’s High Line, where her teas can be found within already established businesses.

As the tea business grew, Miriam again expanded T Salon by focusing on distributing tea as a wholesale tea merchant with a focus on eco-friendly business practices. Her passion for tea combined with her passion for the environment has revolutionized the tea industry to create a sustainable industry with a conscience.

Kelley Suttenfield is an acoustic jazz vocalist known for her “passionate delivery that can penetrate hearts” (JazzReview) with “a velvety touch” (Jazz Times). With a diverse repertoire ranging from Brazilian standards to the Beatles and beyond, Kelley’s music creates an evocative mood that clearly resonates with her audience. Kelley performs regularly in New York City, and has toured the Eastern US, as well as Denmark and the UK. She was a finalist in the 2008 NYC Jazzmobile Jazz Vocalist competition and released her debut CD entitled “Where Is Love?” on Rhombus Records in 2009. For more information, visit kelleysuttenfield.com

Sandi is a mainstay of the New York music scene, having recorded with Roberta Flack, Hubert Laws, Abbey Lincoln, Joss Stone, Britney Spears, Whitney Houston, Terence Blanchard, Dizzy Gillespie, BeBe Winans, among others. Sandi has appeared in Broadway shows, including “Sunday in the Park with George,” “Chess,” and “The Mystery of Edwin Drood.” Sandi is on the Moscow 57 Entertaining CD “Ice Wine – songs for Christmas and dark winter nights” with Ellen Kaye and Ethan Fein.

Richard Stein, the celebrity hairstylist has gone mad and is telling his life story in East End Boys and Cockney Sparrows, a stand-up musical memoir. Debunking the myth of the east end boy, Stein carefully traces a line of humor, sentiment and decorum in an unsteady attempt to sing his way through life, while adding spicy Jewish jokes.

Stein last appeared in the underground hit, “The Chatty Barber,” in the Hotel Savoy. In 2006, his show, “The Demon Barber of Mad Ave” was at Helen’s on 9th Avenue.
Richard is known as a “hairstylist to the stars with a divine salon” at 147 East 62nd Street, NYC.

One thought on “Episode 7”